Chinese smartphone maker Oppo is also said to be planning to introduce new phones at MWC 2019 with this new design, and now the company has filed patent applications demonstrating alternate ways to use the punch-hole, apart from integrating the selfie camera. The company’s patent applications include new swipes and actions using the punch hole to enable opening apps and even closing them.

Also Read: Finally RealMe is Ditching Oppo’s ColorOS For its Own ‘RealmeOS’

By making a swipe movement at the top of the display the icons will appear. Users can scroll through the icons, allowing for more app icons to appear. The camera icon will always stay in the same place.

According to the second filling, the camera icon overlays the punch-hole. By clicking on the icon, users can open the camera app. By swiping it to the right, the camera app will be turned off.

While this is still a patent, such an implementation could help Oppo hide the camera hole in more affordable devices. The patent also confirms Oppo’s intentions to adopt the punch hole camera display for its smartphones in the future. 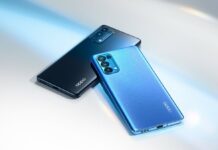 Some of the Best Budget Oppo Smartphones with Good Specification

Oppo Find X3 Pro: All You Need to Know

How To Change The Punch-Hole Camera To Battery Indicator