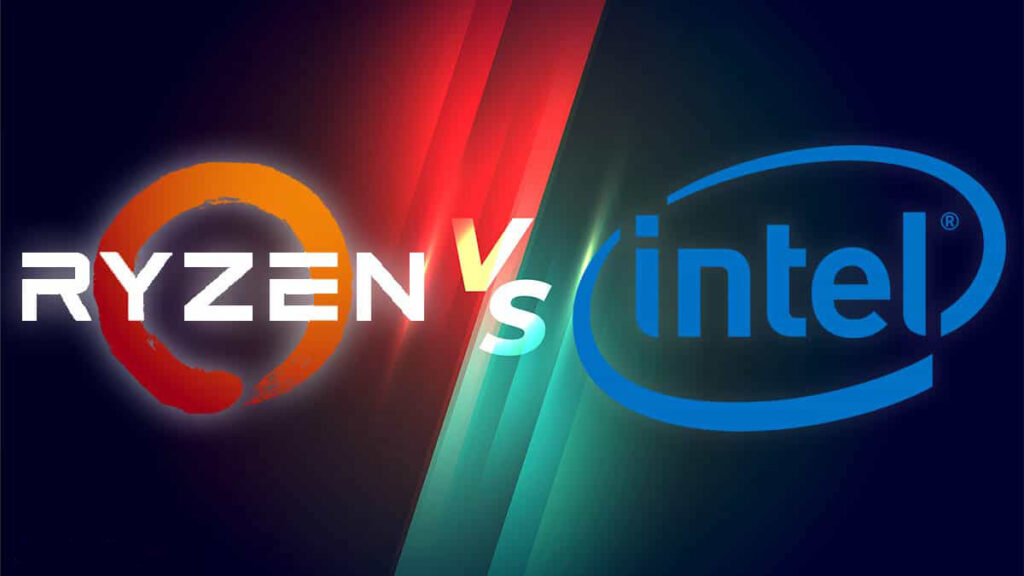 Perhaps one of the biggest and never-ending debates in the computer world is AMD Ryzen vs Intel CPUs. It is quite an interesting and important one.

If you go out and look for a laptop or a CPU for your PC in general, there are just two main choices really and that is AMD Ryzen CPUs and Intel CPUs.

In this article, I am going to further discuss the forever-going debate on AMD Ryzen vs Intel CPUs. Perhaps this will give you a little more clarity on the current status in the market.

So here is the deal, I asked my friends about which processor they have on their laptops or computers.

Here’s the deal, I know it’s not a lot but I asked 30 people, and here are my findings:

Also, Read: What are the Advantages of Different Video Formats?

As you can see, out of 30 people, 22 have laptops/desktops with Intel CPUs, and only 6 people have a laptop/desktop with an AMD CPU.

Considering the fact that most of my friends are also from a tech background and know about the AMD Ryzen series, it is quite shocking that AMD’s share in my findings is quite low.

I was curious to know why did I find such results so I asked my friends why did they pick Intel over AMD and most of them had the same answer: when it comes to laptops, there aren’t many AMD laptops in the midrange and upper range. They also said that they were recommended by a lot of people to not go for AMD processors.

So then I turned to people who use AMD processors and I found something interesting. Out of 6 AMD processor users, only two were using a laptop with an AMD processor.

Rest all had custom desktops that they made for medium-level gaming. Their reason to pick AMD was: because it was the only brand offering gaming capabilities at affordable prices.

So the AMD Ryzen vs Intel CPUs debate is quite real and let’s discuss it a little bit more.

As mentioned earlier, if you are looking for a normal laptop or planning to build a PC, there are two main choices for you: AMD Ryzen processors and Intel processors.

When you talk about processors for custom PC and laptops, things change a little bit. You see, most laptops do not allow you to replace parts as they are closely packed in a tiny form factor.

So the brands really need to pick out the best processors for their laptops. It turns out that Intel still rules the laptop processors sector and most laptop brands still prefer Intel CPUs for their premium and upper midrange laptops.

However, if you come to the affordable laptops range, you can get some great AMD laptops from a lot of brands.

Now let’s talk about custom PCs because that is where the real AMD Ryzen vs Intel battle gets intense.

Also, Read: Motherboard Buying Guide: All You Need to Know

Here is something that you need to know right away, AMD Ryzen CPUs are the best CPUs if you consider their pricing and the performance they provide. Here is just a rough comparison of AMD Ryzen vs Intel CPUs prices:

So in the budget section, the AMD Ryzen CPUs are generally more price-efficient and provide much better performance compared to Intel.

So if you want to build a PC for gaming or some other performance-heavy task, the best choice for you would be to go with the AMD processors.

The thing is both Intel and AMD have great processors to offer in the budget segment but AMD takes an edge with its value for money processors. You see the AMD Ryzen 5 can beat any of its Intel counterparts with the same specifications in pretty much every task.

My goal with this article is to not confuse you with numbers and compare different AMD Ryzen and Intel processors with each other but to give you an overview.

So here is the deal: When it comes to budget desktops, the AMD processors are far better as they are more affordable and provide better performance compared to their Intel counterparts.

In terms of gaming and other tasks such as video editing, animation, etc, both AMD Ryzen and Intel CPUs work great and the Intel ones in the upper price segment have an edge over AMD Ryzen CPUs.

AMD Ryzen vs Intel CPUs: Which One is Best For You?

If you are an average user who just wants to use their laptop/desktop for watching movies and stuff, both Intel and AMD have some great budget options.

If you are looking for budget gaming then AMD Ryzen 5 series processors are the best in the market.

When it comes to heavy performance for multi-threaded tasks and stuff, AMD is still the better option considering the price. If price isn’t a barrier for you then I suggest considering Intel processors for high performance.

Furthermore, when it comes to laptops, you will hardly find premium laptops with AMD processors and even if you do, they will have an Intel variant which will have better performance. So going with laptops with an Intel processor is the de-facto choice for anyone.

I hope this gives you a little clarity on the AMD Ryzen vs Intel CPUs.