Company’s Co-Founder Carl Pei confirmed that the smartphone design will have a notch. He defended the decision by saying the OnePlus notch will be implemented better than other Android makers have managed. The notch on the OnePlus 6 will measure 19.62 x 7.69mm. A smaller notch would mean smaller camera module, which in turn means lower quality photos. 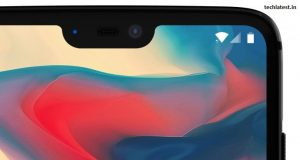 A recent photo leak allegedly reveals a complete new back design of the smartphone. OnePlus 5T recently went out-of-stock in the US indicating that the next flagship from the company is coming soon this thing suggests that the new flagship phone is to be launched soon.

The back is wooden-textured like company’s wood-inspired cases.Also, the frame has an offset angle at the bottom which is different from the softly rounded corners like in case of previous ones.

Moreover, OnePlus seems to have kept the headphone jack, USB Type-C port, single speaker/ mic grille setup the same yet again. The image also shows that the smartphone may have a dual-camera assembled in a vertical module other that the horizontal one. From the image,it has rectangular fingerprint scanner at the back above the OnePlus logo, a change from the circular one in the last version. The most interesting highlight of the leak is that the company will stay with 3.5mm Audio Jack.

The specifications to be expected in the phone also have been speculated and it is expected to have 6.28-inch full-HD+ AMOLED display, a dual rear camera setup (20-megapixel + 16-megapixel), a 20-megapixel selfie camera, 3450mAh battery, 6GB RAM, and 128GB inbuilt storage, latest Snapdragon 845 processor.

As the phone is closer to the launch date their are many speculations made lets see how many of them turn out to be true.