Are you a fan of Realme, then there is a piece of good news for you, as realme is set to launch a feature pack phone expected under the mid-price range. The official launch is to be held on 6 February.

The phone includes jampacking features that are clear from the teasers. The device is promoted under the tag “Entertainment Ka Superstar”, with its official sale on Flipkart along with its company tag.

Explore a universe of possibilities and #SeamlessFun now with #EntertainmentKaSuperstar.#realmeC3 becomes the first #realme smartphone that is launching with preinstalled UI.
Know more: https://t.co/Vb4h8Ghp2F pic.twitter.com/hlN7wXffKI

Now, is the phone superstar? Let us see it through its features.

The all-new realme c3 is the first phone to have the latest RealmeUI which is based on android 10 based os. The UI has tons of features with ample gestures and packs in a clean interface. Also, it packs in a 5000mah long-lasting battery.

If you are a gamer and a die-hard fan of MediaTek then this processor will give results more than your expectations. The processor is octa-core with 2 cortex of A75 clocked at 2GHz and 6 cortex of A55 clocked at 1.75GHz. Also, it has 12nm power-saving technology.

It has 6.5 inches mini drop notch display that we see in older devices of realme series. The screen to body ratio is 89.8%.

The device is set to be launched with 3 cameras-1 at front and 2 at the rear side. The rear primary camera is said to have 12MP with a flash. While other lens specifications are not yet revealed.

It is expected to be launched in 2 variants of 3GB/32GB and 4GB/64GB. The color combination revealed until now is just blue.

Surprisingly many good features are yet to be revealed after its launch. Also, we can expect the realme to provide a fingerprint sensor and cap the device under the 6k range.

But talking about the features it has a lot of them at this price range(Budget segment).

Finally, comment below if you are excited about its features and want to buy. Also, comment on what is the price range that the device can be put by realme. 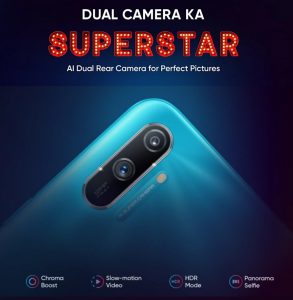 Why is One AirPod Louder Than the Other?

What to Do When You Lose Internet: Basic Internet Connection Troubleshooting