A couple of days ago we covered the TENAA listing of Asus’ next gaming phone from their Republic of Gamers(aka ROG) segment i.e., Asus ROG Phone 2. And today it finally announced by Asus team with a lot of gaming accessories which is meant for a gamer.

The phone is basically designed for hardcore gamers by thinking each and everything that could be needed the design, compatible gaming accessories, best performance, etc. ROG phone was a first announced last with extraordinary features like a 90Hz FHD AMOLED display, an overclocked Snapdragon 845 SoC, 3 USB type-c ports, ultrasonic pressure-sensitive “Air Trigger” buttons, and many more. And this year Asus again impressed the gamers out there with ROG Phone 2. 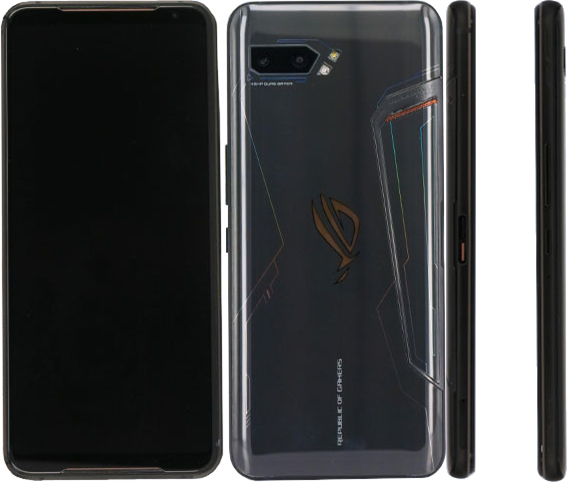 Speaking of the display, ROG Phone 2 has a 6.59-inch AMOLED display with a refresh rate of 120Hz which is much better than last year’s 90Hz display and supports 10-bit HDR. Although the refresh rate is set to 60Hz out-of-the-box, it can be changed in display settings later. It also features 49ms touch latency which is a result of the 240Hz touch sampling rate. 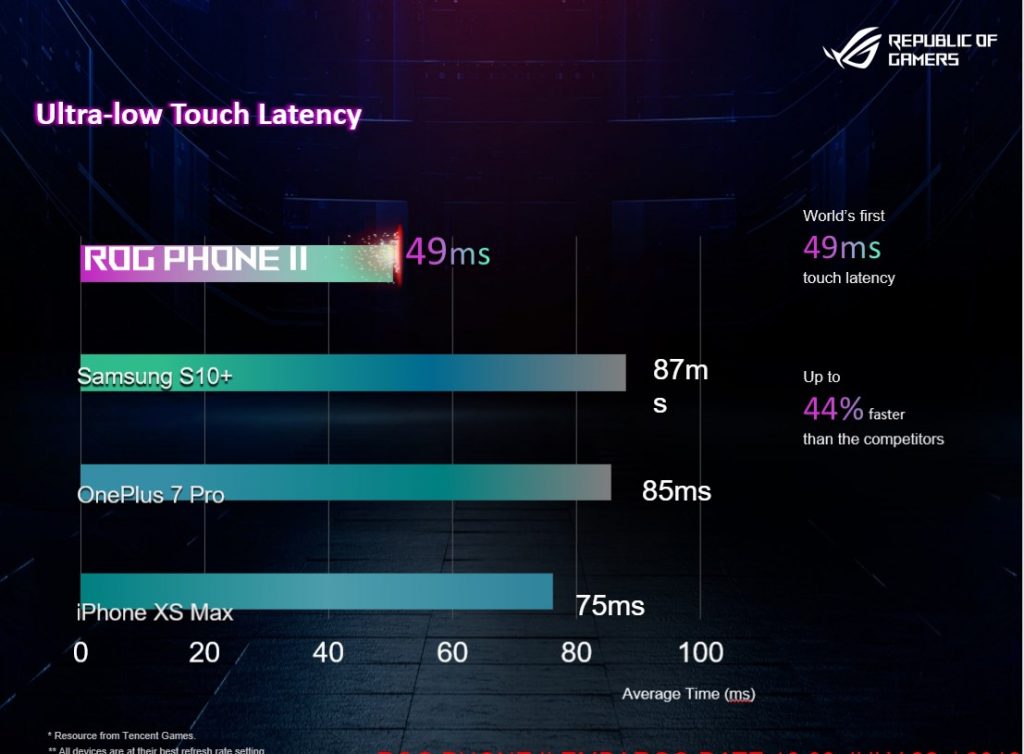 ROG Phone 2 has a dual-camera setup at the rear which is equipped with a 48MP Quad Bayer(Sony IMX586) as the main camera sensor and a 13MP secondary sensor for the 125° ultra-wide-angle. At the front, it doesn’t feature any pop-up, flip or sliding mechanism rather it has a dedicated 24MP selfie camera. 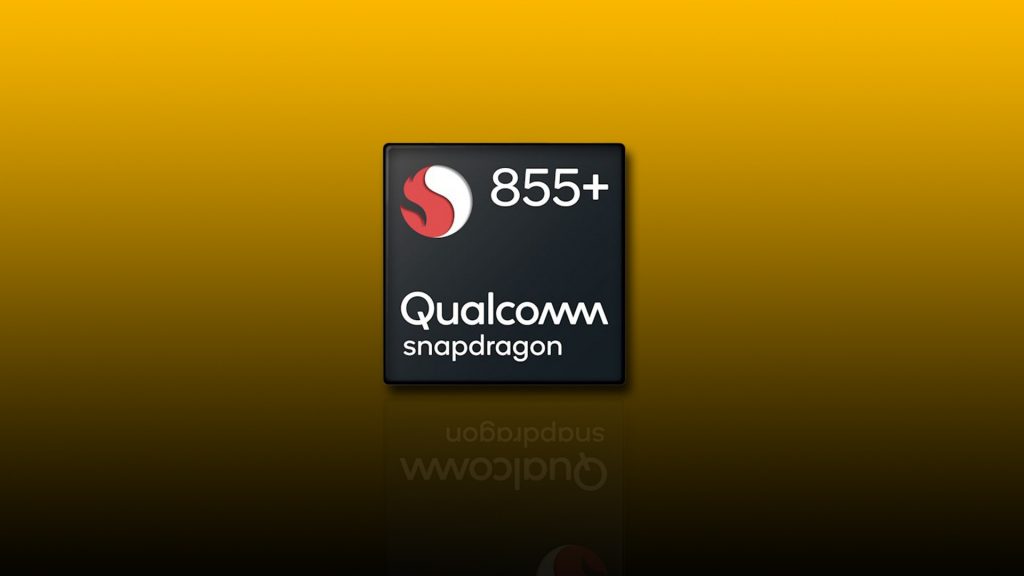 Under the hood, ROG Phone sports the latest Qualcomm Snapdragon 855 Plus SoC which overclocks the Adreno 640 GPU to 675MHz for a 15% boost in performance. The prime CPU core is overclocked to2.96GHz for a 4% boost in performance. The SoC is paired with 12GB of RAM and up to 512GB of onboard storage which works on UFS 3.0 technology. It is also equipped with a 3d vapor chamber which reduces the throttling for better performance.

And again this year it has the ultrasonic pressure-sensitive “Air Trigger” buttons specially designed for better gaming experience but with an enhanced vibration latency which is reduced by 68% from 63ms to 20ms.

The device has a massive 6,000mAh battery with 30-watt fast charging support which ultimately relies on a type-c port for charging. And as it sports a 3.5mm headphone jack which is very important for a gamer. The device will have all the basic sensors. ROG Phone 2 will come with Android 9 on board.

Like last year, Asus also included a bunch of accessories with it. Some of the accessories are same as last, some are same but with more enhancement and some are totally new.

Like the clip-on fan which is almost same but this new and improved AeroActive Cooler II is apparently four times quieter, and it can reduce the surface temperature by up to 5 degrees Celsius lower.

Another included accessory is the skeletal Aero Case, which leaves the phone’s glowing logo exposed, and it also lets you mount the clip-on fan over it.

And here is the brand new ROG Kunai Gamepad, with which you can clip the two controllers together via a holder, in which you can toggle between Bluetooth, USB and 2.4GHz RF connection (there’s a USB dongle receiver for this) to control the phone. 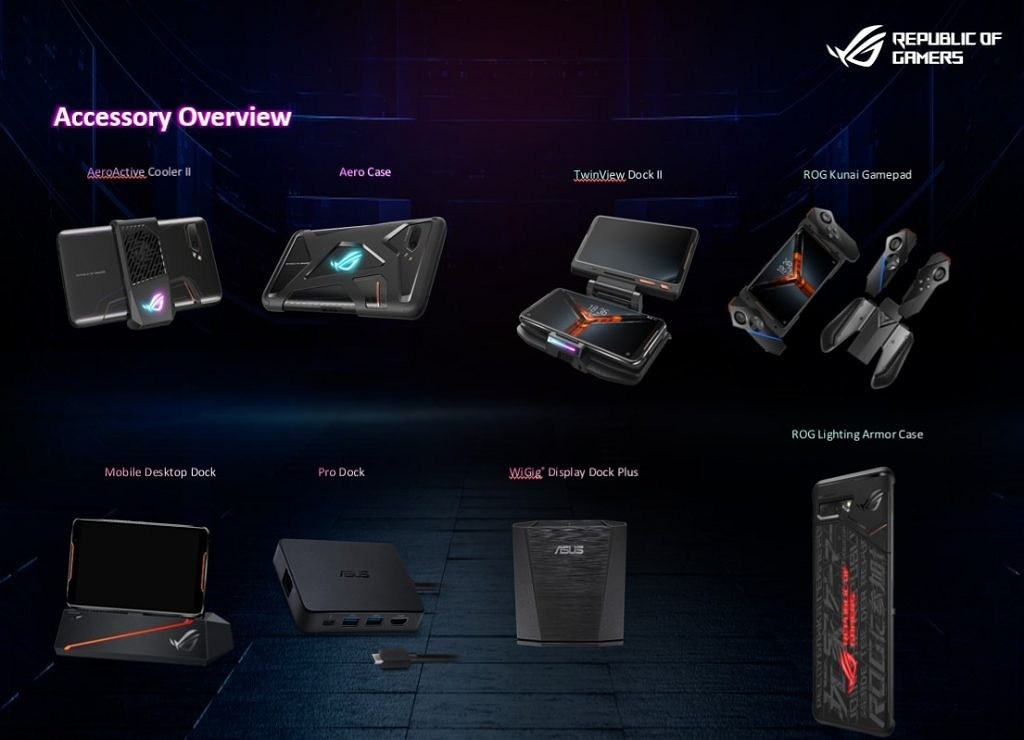 These are the list of all accessories announced with ROG Phone 2: