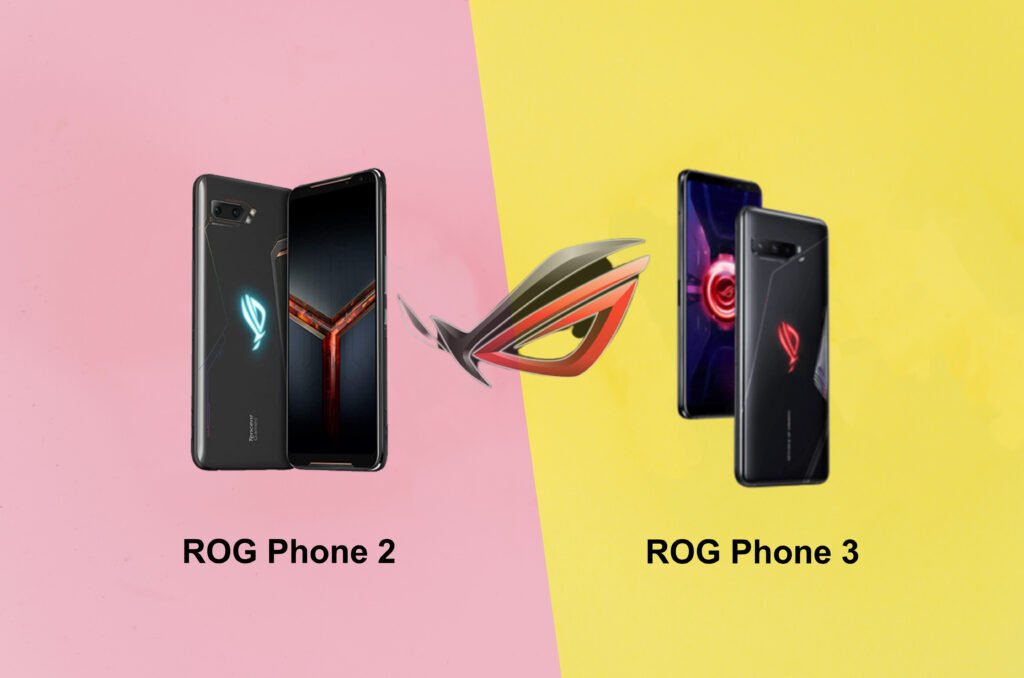 ROG phone 3 comprises of 16GB of LPDDR5 RAM and have about 512GB of UFS 3.1 storage. The phone also comes up with a “GameCool 3” system which has a multi-layered cooling system with a large graphite film, over a vapor chamber, and a hit sink, to keep the device cool while playing heavy games and using bulky software.

Moreover, the Aero Active Cooler comes up attached with the device, it acts as a circulator with a 40% more rpm speed than the predecessor one. It can be easily attached to the phone via the USB port.

ROG Phone 3 gives a simplistic but quiet standard look over ROG Phone 2. ROG phone 2 has lots of red accents over grey glass back whereas the color complexion is toned down in the latest smartphone, it comes up with a sleek, comfortable design, the device is completely designed from the gaming point of view, it will give you a premium grip while holding it.

ROG Phone 2 has red and copper color designed at the back, all such designs are reduced (not completely removed)this time, and even big air vents are also placed under the glass to provide an enhanced yet superior quality of the device. And we can see a ROG logo at the center below the adequately designed triple-camera setup the logo is designed with RGB, so it shows different colors from different angles.

This time with ROG Phone 3 camera is slightly bumped out from the backside, unlike ROG Phone 2 in which it is completely inside the glass panel. In the front side of the device, we got some bezels but these bezels are useful, as it helps in increasing gaming performance, your palm won’t touch the screen directly while playing the game, and these bezels are housed with dual-front-facing speakers that are too for better gaming experience and clear audio.

Moreover, the device has two buttons at the right edge which are ultrasonic Air triggers that can split into four and act as four buttons instead of two. These buttons support three modes, you can swipe over them, or tap on them, and can also long-press for a specific purpose (you can change this from settings).

One another biggest thing about the design of the phone is that the 3.5mm headphone jack is completely removed, there is no place for one more hole, you can use wired earphones/headphones by using USB C to earphone plugger it comes up with the smartphone inside the box. The entire smartphone is of 240gram of total weight.

If we talk about display, so ROG Phone 3 comes up with an impressive display that supports 144Hz of refresh rate and 1ms of response time, which is the highest refresh rate until now in the smartphones. Asus improves display specification with each of its devices each year. ROG Phone 3 is featured with a large 6.59-inch AMOLED display panel with 2340 x 1080resolution and also have HDR10+ certification and an average Delta E <1.

Moreover, the touch latency is also improved it is bought upto 18ms for slides and 25ms for taps, which was 40ms in the predecessor ROG Phone 2. It also has an in-display fingerprint scanner, and the display is shielded by a Gorilla Glass 6.

The battery capacity os 6,000mAH which is same as we have in ROG Phone 2, but this time battery is said to be more improved, and it comes up with a Power Master app through which you can control charging speed to regulate battery’s life (as it is believed that if we charge our device with fast charging so battery’s run-time gets reduced, and this also affects battery life, with slow charging feature battery life will be extended also the run-time will increase).

Although ROG Phone 3 supports fast-charging and comes up with a 30W HypeCharger, moreover, it is also supported by a Qualcomm’s Quick Charge 4.0 via a second IC on the phone. So, with such improvements, we can expect that the 6,000mAh battery in ROG Phone 3 will have more running tenure than one in ROG Phone 2.

As it is a gaming smartphone series, so manufacturers aren’t much concerned about camera off the device, and hence this is the only cost-cutting point. ROG Phone 2 comes up with a dual-camera setup at the back in which one is 48 MP of Primary cameras, and the other one is an ultra-wide lens of 13MP. and it has a 24MP of front selfie-shooter.

The ROG Phone 3 features a triple-camera setup with 64MP of the primary camera (Sony IMX686) + 13MP of ultra-wide lens+5MP of the macro lens. The front camera isn’t changed this time, ROG Phone 3 also has the same 24 MP of selfie shooter.