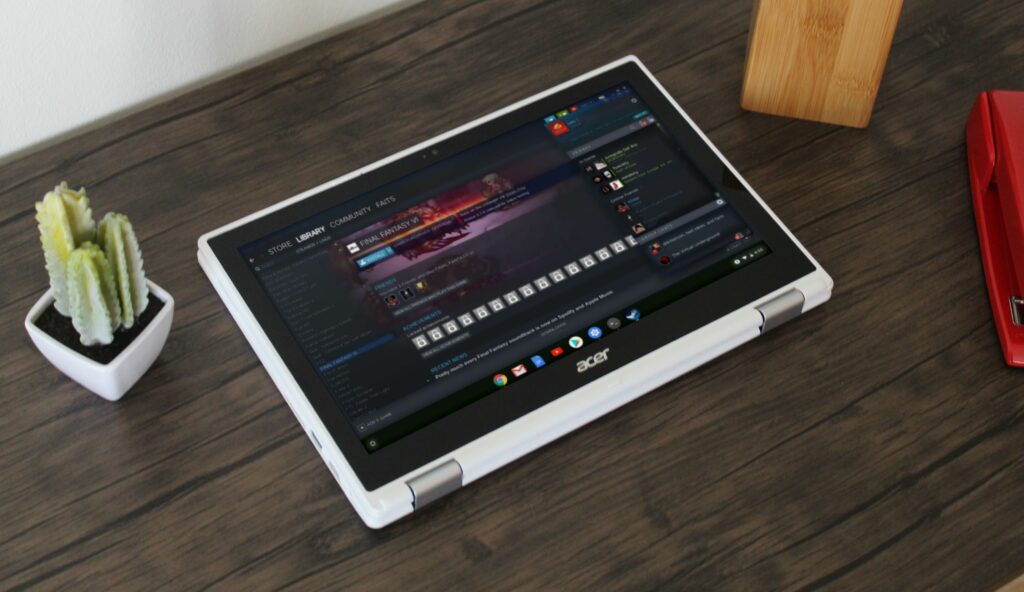 Steam is one of the best gaming platforms and also has one of the most powerful distribution services. This platform is supported officially on Windows, Mac, and Linux. However, many people have a query: Can one run Steam on Chromebook or not?

Can Steam Run on Chromebook?

Since Chromebook does not consume many resources to run, most manufacturers try to use low-end specs to design these laptops. However, if you are planning to run Steam on Chromebook, then it is recommended to buy the ones with i5 and i7 processors.

Google already developed the Alpha version of Steam, and it was officially declared that Google is planning to launch this version in selected Chromebooks. The Alpha version only works with the systems having 11th gen i5 or i7 processors, 8GB RAM, and Iris Xe Graphics.

Moreover, Google has provided a list of Chromebook models that can avail of the Steam Alpha. Here is the list:

If you have any of the models given above, follow the below steps to install the Steam Alpha:

Running Steam through the Android App is one of the easiest ways to play games. However, the Chromebook needs to qualify for certain requirements that need to be fulfilled. To use the Steam link, one must have another PC that is connected to the same network as the Chromebook.

This option will come with a set of limitations as both the devices need to connect to the same network.

Here is how you can install Steam Link:

Install Ubuntu Linux OS on your Chromebook to Use Steam

Installing a second Operating System is not as easy a task as it sounds. If you have technical knowledge on installing the Operating System, you can install it by yourself or take an expert’s help.

Here is how you can install the Ubuntu Linux OS on your Chromebook:

Install Ubuntu with Crouton by following the process below:

Use Steam on Chromebook through Cloud Computers

Without owning another Personal Computer, you can use Steam on Chromebook by purchasing a Virtual Windows Operating System subscription. However, this requires you to have a good internet connection.

The above-mentioned are some of the best ways to install and run Steam on Chromebook. Please let us know which of these methods has been useful for installing Steam on your Chromebook.