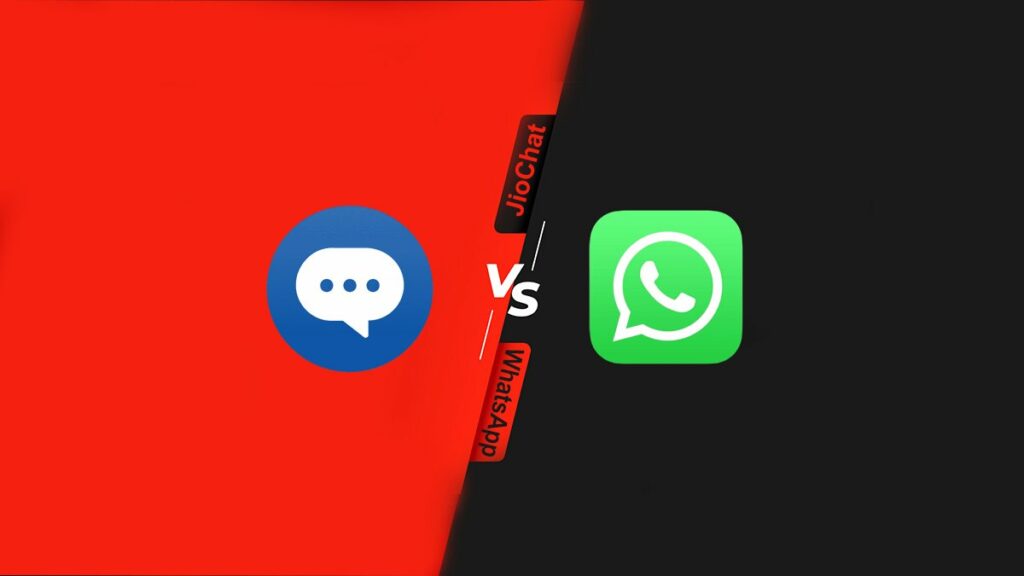 The ‘Aatma Nirbahr Bharat’ campaign initiated by our honorable Prime Minister Mr. Narendra Modi, many Indian applications are surfaced online, and getting millions of downloads just within a few days of launch. And participating in this campaign, India’s leading telecom company, Reliance has released a video-conferencing app, an Indian alternative of Zoom, Google Meet, and other video-conferencing platforms.

After the successful launch of JioMeet, Reliance Jio launched another application, JioChat- which is said to be an Indian alternative of WhatsApp. So that’s the topic of today’s post, here we will discuss JioChat vs WhatsApp- Should you Replace?

Note- In this article, I have written my personal opinion. This post does not intend to hurt anyone’s feeling toward any application

JioChat vs WhatsApp – Should You Replace?

JioChat is a primary messaging app from telecom giant Reliance. This was launched back in 2015 for the Jio mobile and sim cardholders, but after observing an immense increase in social-networking sites, due to ongoing COVID outbreak. Reliance Jio steps into social-networking and launched its JioChat for Android and iOS devices too. With the availability of JioChat for Android and iOS devices, it is said to be an Indian alternative of WhatsApp.

A few days back, Reliance digitals launched JioMeet which was almost a clone of Zoom, and now JioChat which looks like a carbon-copy of WhatsApp. Let’s discuss JioChat vs WhatsApp and will cover all the similarities and differences between both messaging applications.

After installing and downloading the application, you will get a comparable setup or sign-up page as we get in WhatsApp. After setting up, JioChat’s user interface is almost similar to WhatsApp, you get a camera, chats, stories, and calling icons placed at the same places as in WhatsApp. Settings and profile options are also placed at the same place, with almost similar icons. Moreover, adding or starting a new chat option is also placed in the same position.

I think Reliance Jio has a lack of good UI/UX developers, so they are preferring to clone the same interface as of there alternatives. They aren’t even trying to make something more innovative and attractive. The company has done this cloning process with JioMeet, copied Zoom’s UI and features, and now with JioChat.

Well, if we talk about features of the JioChat vs WhatsApp, so somehow I feel JioChat has some additional features than WhatsApp, and at the same time, JioChat missing some important features too. In personal messaging section, JioChat is completely similar to WhatsApp, you will find same features (although some missing), like when you tap on three dots from the top, so in WhatsApp, you will find an option to directly export your chat and more options, but in JioChat it has few including chat information, block contact and two more.

Now, coming to Status, so JioChat has story features but I don’t find any option to upload my own story, however, you can watch numerous videos there uploaded by some popular sites such as PinkVilla, etc. and you can also share those stories with others. So, this needs to be changed, we should have an option to upload our own JioChat story. WhatsApp is way better than JioChat in this aspect, you can upload your own story as well as setup controls who can view them, and who can’t.

JioChat is missing a bunch of features, we get in WhatsApp. let’s have a look

There are so many small unstable bugs, which directly affect the user experience. The app doesn’t have a finished touch and missing many important features, needs to be fixed.

In terms of security, WhatsApp is way better and secure than JioChat. Chats, messages, and calls in WhatsApp are end-to-end encrypted, but not in JioChat. However, JioChat provides encrypted chat but not end-to end-encrypted.

Also Read: How To Stop Others From Adding You To WhatsApp Groups

JioChat vs WhatsApp, well, JioChat is missing many important serious features, which can’t be ignored and if we want to switch completely from WhatsApp so as a user of WhatsApp from last 5-6 years it will be too tough for us (me at least) to adapt another application which doesn’t have so many features.

Many Indians are just blindly replacing all of the applications with Indian alternatives, for them I would like to say, ‘Please Pause for a while, Rethink, and then Replace’. Don’t do things blindly for the sake of Nationalism. Application developers put the same amount of effort into developing an app either they are from India or other countries, it’s appraising that we are supporting our country’s products and people.

Also Read: Facebook is Working on Cross-Chat Support with WhatsApp

Think for a while before replacing any app, does that alternative have all the features according to your requirement? You are downloading any Indian app which is none of your use, Why? It’s great to be nationalist but being a nationalist doesn’t mean you are a fool, Right?

JioChat has the potential to be more effective and better than WhatsApp, but it needs to be reviewed and redesign only because of its so many missing features, and small bugs. It’s good to opt for some useful features from any widely popular application or alternative, but you can’t make a clone or carbon-copy of it. Put your efforts and design something more innovative. In the name of alternatives, Indian developers are just cloning primarily available apps, either we see Zoom’s alternative JioChat or TikTok’s alternative Mitron.

Well, finally I would like to conclude that after using JioChat for 2-3 days, I don’t think it can replace WhatsApp, however, our government can make this possible forcefully (by banning WhatsApp too) but no one (right now) will wish to leave and replace WhatsApp, its smooth performance, beloved features, simple and clean UI. WhatsApp comprises all useful features, nothing more and nothing less.

If Reliance digitals improve some of its features, so JioChat has the potential to be better than WhatsApp. Moreover, Reliance Telecom is an Indian company, and Indian’s always love and support it, so it has major chances that people will accept the application and use it. Also, if we ignore missing features and copied UI, so JioChat offers some additional features, which make the app more powerful and attractive.

Also Read: How to Watch JioTV in Windows 10